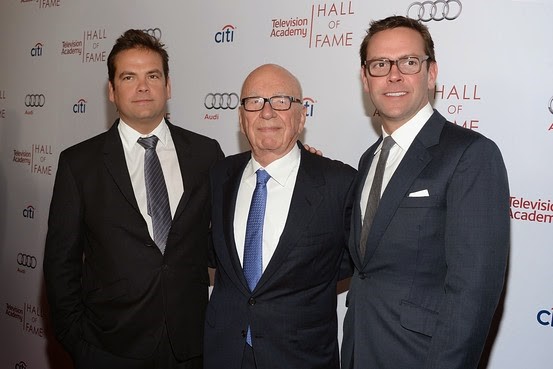 When The Newsman Is The News: Rupert Murdoch’s Family Feud

(You can view the original article at The Briefing Wire)

The New York Times recently published a lengthy article on the Rupert Murdoch media dynasty of news and entertainment companies and politics. It is not the politics that drew my attention, but the predictable family in-fighting and vying for control in which two of the six Murdoch children have engaged. Rupert has been married four times; almost 3 decades to his first wife, Patricia Booker who is the mother of Prudence. The second marriage to Anna Mann produced three of the six children, Elisabeth, Lachlan, and James. His current wife, Jerry Hill, is a model and actress and has children fathered by Mick Jagger. Rupert is 88 and starting to show signs of failing health, which is bringing leadership succession of his multi-billion-dollar businesses into question.

The four children named above are the subject of the NY Times article, with emphasis on Lachlan and James. All four children have held management positions in one or more of the many companies owned by Murdoch and all imagined they would one day control everything. Lachlan and James have been the primary contenders for the Murdoch throne. The article says:

“It had made for fraught family dynamics, with competing ambitions and ever-shifting alliances. Murdoch was largely responsible for this state of affairs; He had long avoided naming one of his children as his successor, deferring an announcement that might create still more friction within his family, not to mention bringing into focus his own mortality. Instead, Murdoch tried to manage the tensions, arranging for group therapy with his children and their spouses with a counselor in London who specialized in working with dynastic families. There was even a therapeutic retreat to the Murdoch ranch in Australia. But these sessions provided just another forum for power games and manipulation.”

It has not yet deteriorated into lawsuits, but once Rupert is gone, one wonders if that will be inevitable. “Over the years, Lachlan and James traded roles more than once. It was no secret . . . Murdoch had always favored Lachlan.” At one point, Lachlan and James shared leadership over all the companies with all divisions reporting to them equally. Considering each were very different people with differing personalities, leadership styles and skills, and politics; it is easy to see this was a strategy doomed from inception. Lachlan would be the survivor. However, ownership of all the companies are held in trust and all four children will eventually own equal shares.

Imagine the rivalry and politicking that will take place for control. A 50/50 vote means nothing will happen and the empire will stagnate or sink like the lost city of Atlantis. Lachlan and James will agree on little, so each will try to woo other siblings to their side to get a 75/25 vote. If one of the siblings takes a passive role, he or she will win the favor of two and the venom of the third. Abstaining still gives the victors a 2/1 majority, with the losing owner unhappy, unsatisfied, and angry.

Lachlan, at 33, was the rising star, but clashed constantly with senior executives, so, like the Prodigal Son, was given $100 million dollars and moved to the family homeland in Australia and James took over with the understanding in discussions between the two boys and their father, that James would be the successor. At age 84, Rupert asked Lachlan to move back to the US and Lachlan and the company president, Chase Carey, delivered the news to James he was out, and Lachlan was in. Rupert was absent. You can imagine how James felt after dedicating years of his life to building the company only to be unceremoniously terminated and what his attitude towards his father and brother would become. Rupert continues to avoid designating a successor for the companies after his death and from the article there seems to me no clear formalized succession plan.

Wealth and power do not necessarily translate into wisdom and there is a lot lacking in this family, at least with the patriarch. Here are a few seeds of what I see as a growing problem. (1) Multiple marriages and children from different mothers. (2) Estate planning that treats everyone equally instead of fairly. (3) Non-existent succession planning. (4) Little or no trust between siblings and children and parents. (5) Terrible communications and non-communication. (6) Failure to recognize each child’s individuality and need for significance. (7) No stated unifying family mission, vision, and value statements. (8) No determination on what each child needs to be significant or how they can achieve it. This family is not a team, it is a battlefield. (8) Betrayal between brothers and between father and son. (9) Spousal sway over brothers. (10) Differing politics and values.

So, what can we learn and how can these situations be avoided? There is no magic formula but here are solutions. Recognize these dynamics as typical in all families and problems increase as wealth increases. Be intentional, proactive, and willing to do the hard work and have the difficult conversations before the problems become unmanageable. Competition can be a good or bad motivator but must be managed carefully. If it causes a person to be productive and successful, encourage it; if it pits brother against brother, nip it.

Understand people and money in every family is an inherently toxic formula and get help from qualified professionals who can address and coordinate both topics simultaneously. Rupert’s exercise with retreats and a London therapist created more problems than it solved. It is a mistake to hire therapists for a one-time session to deal with constantly changing people problems who do not and cannot address the fact that the financial side of the family is causing the problems. Financial advisors, accountants, and lawyers deal with the money issues; but do not and cannot solve the people issues. This great divide always ends in a train wreck.

Use the family wealth to help each member achieve significance as they define it for themselves. First, help them identify what significance would look like for them then provide the education, training, resources, and environment that will achieve that significance. The article says James eventually left the family, no longer willing to tolerate the conflicts and betrayal he experienced, and a wasted life trying to build what he would never own. How much better it might have been to have these discussions and discoveries at the beginning of the process. Both brothers want to be king of the empire, which is impossible; but it is possible each could be king of their own empire. Treating family wealth as, or even creating a formal, family holding company allows the wealth to buy or start multiple enterprises, each needing a king. There may still be competition for leadership of the holding company, but this at least offers a possibility of diminishing conflicts if each family member is happy overseeing their own fiefdoms.

Finally, the Murdoch family seems focused on transferring things and control and has little concern for transferring values like honesty, integrity, unity, kindness, love, commitment, etc. A family that does not have a strong and shared foundation of ethical values will eventually crumble. Many people say, “Money is the root of all evil.” That is a misquote. The Bible says, “The love of money is the root of all kinds of evil.” Money is neither good nor bad, it is neutral, just a tool. In medical terms it is a drug that can promote good health and save lives when used properly. The same drug can kill if its use is abused. When the goal is control and owning things, people become tools to be used improperly and selfishly. When the objective is helping people achieve significance, money can be the prescription that improves the family’s and everyone’s health.