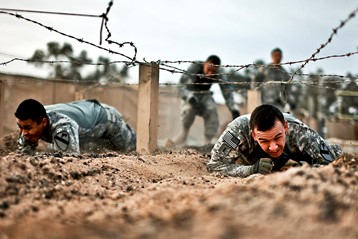 Is your life full of difficulties and temptations? Then be happy!

You can also read this article at USA Daily Times

“This guy works his tail off. He has one drill where he putts 100 three-footers in a row. If he misses one during that string of 100, he starts over. I can imagine how many times he had to restart that process. I’m sure he would have loved to get out on the course and play. But he doesn’t. He stays on the putting green until the task is complete. That is self-discipline.”[i]

The gentleman Mr. Bockius is describing is Phil Mickelson, a professional golfer, but it could be anyone who has achieved a measure of success; people like Olympian swimmer Michael Phelps, Silvester Stallone as boxer Rocky Balboa or Rambo, Supreme Court Judge Clarence Thomas, Dr. Carol Swain, or a US President.

Since we know about Mr. Phelps and Mr. Stallone, let us learn about the other three people.

Clarence Thomas (Black American): “Clarence Thomas was born in 1948 in Pin Point, Georgia, a small, predominantly black community near Savannah founded by freedmen after the American Civil War. He was the second of three children born to M.C. Thomas, a farm worker, and Leola Williams, a domestic worker. They were descendants of American slaves, and the family spoke Gullah as a first language. M.C. left his family when Thomas was two years old. Thomas’s mother worked hard but was sometimes paid only pennies per day. She had difficulty putting food on the table and was forced to rely on charity. After a house fire left them homeless, Thomas and his younger brother Myers were taken to live with his maternal grandparents. Thomas was seven when the family moved in with his maternal grandfather, Myers Anderson, and Anderson’s wife, Christine (née Hargrove), in Savannah.”

“Living with his grandparents, Thomas enjoyed amenities such as indoor plumbing and regular meals for the first time in his life. Thomas calls his grandfather “the greatest man I have ever known.” When Thomas was 10, Anderson started taking the family to help at a farm every day from sunrise to sunset. His grandfather believed in hard work and self-reliance; he would counsel Thomas to “never let the sun catch you in bed.” Thomas’s grandfather also impressed upon his grandsons the importance of getting a good education.”[ii]

Dr. Carol Swain (Black American): “Carol Miller Swain was born on March 7, 1954, in Bedford, Virginia, one of twelve children. Her father dropped out of school in the third grade and her mother dropped out in high school. Her stepfather used to physically abuse her mother, Dorothy Henderson, who is disabled due to infantile paralysis. Swain grew up in poverty, living in a shack without running water, and sharing two beds with her eleven siblings. The second of twelve children, she did not have shoes and thus missed school whenever it snowed. She did not finish high school, dropping out in ninth grade. She moved to Roanoke with her family in the 1960s and appealed to a judge to be transferred to a foster home, which was denied. Swain instead lived with her grandmother in a trailer park.”

Her list of achievements and honors is too long to include here, so please go to this link to find out more about this amazing woman.[iii]

US President: “One man lost his job and ran for his state legislature and lost. Then he started a business, which failed, so he again ran for office and was elected to his state legislature. Shortly after being reelected, he had a nervous breakdown. He got a law degree and went into partnership with another attorney. He ran for speaker of his state legislature and was defeated. His first law partnership was dissolved, so he went into a new partnership. He threw his hat in the ring to be nominated to Congress and was defeated. He went on to lose re-nomination for his legislative seat, he was rejected for a position as a land officer, defeated for the U.S. Senate, defeated for selection as a vice presidential nominee, and defeated in another run for the U.S. Senate.”

“Good grief! Did this man do anything, right? Oh yeah! Maybe it was the part where he was elected president of the United States in 1860 and guided the country through the worst internal war it would ever face, a civil war that would have torn this country apart, but he succeeded in holding the union together? Or was it the part where slavery was abolished and all people, no matter their race or skin color, were freed to pursue their dreams and destinies?”[iv] His name is Abraham Lincoln.

In my title to this article, I gave you only an excerpt, so here is the entire version, “Dear brothers, is your life full of difficulties and temptations? Then be happy, for when the way is rough, your (discipline) has a chance to grow. So let it grow, and don’t try to squirm out of your problems. For when your (discipline) is finally in full bloom, then you will be ready for anything, strong in character, full and complete.”[v]

I substituted the word “discipline” for “patience” in the above paragraph because perseverance and patience are disciplines that can be taught and learned.

Phelps, Rocky, Thomas, Swain, and Lincoln succeeded in life because they were disciplined.

The dictionary has these definitions for discipline:

“Training expected to produce a specific character or pattern of behavior, especially training that produces moral or mental improvement.

When I typed “lack of discipline” in my search engine it gave me these synonyms: Wildness, lack of control, roughness, rowdiness, unruliness, violence, riotousness, raucousness, and disorderliness. Do these words sound familiar considering what we have been seeing on the nightly news in 2020? I am sorry to say these same words can be applied to our institutions of higher learning. It is obvious we have raised an entire generation, with some exceptions, of young people who lack discipline.

We can blame society, but the truth is discipline starts in the home. As we work with families around the dynamics of their wealth and personalities and that historical statistic I constantly quote that 70% of wealth is lost each time it passes to the next generation and gone in three generations, it is usually because the children lack the discipline and ability to properly and effectively manage their lives and the wealth they will inherit.

Parents who do not create a disciplined environment for their children in their early years do great harm to the children and the family that will follow them through adulthood. Discipline applied properly and consistently, with love will produce a happy child. Discipline is too often interpreted as something bad. It can be if it is abusive but disciplining a child out of love because you want them to be “ready for anything, strong in character, full and complete” should always be the objective.

Children want and need discipline. In fact, they will feel unloved if discipline is lacking. It is like saying “I don’t care enough about you to do what is hard for me, your parent, to do but will be good for you in the long run.” A good parent does not want or like to discipline their children when they have done something unacceptable, but to not do so turns their children into those ugly synonyms for “lack of discipline.” I am sure Michael Phelps praises his parents and coaches for instilling in him the discipline he needed to become the most decorated athlete in Olympic history with 28 medals that included a record 23 gold. We are not born with self-discipline; it must be taught and developed over time through experiences.

“If you refuse to discipline your son, it proves you don’t love him; for if you love him, you will be prompt to (discipline) him. Discipline your son in his early years while there is hope. If you don’t, you will ruin his life. Don’t fail to correct your children; discipline won’t hurt them! They won’t die . . . Sometimes mere words are not enough—discipline is needed. For the words may not be heeded.”[vii]

Nancy Samalin is a parent educator and author of Loving Without Spoiling and 100 Other Timeless Tips for Raising Terrific Kids. She offers these seven warning signs you may be raising undisciplined children.[viii]

Additional Reading: What Will The Lack Of Discipline Do To Our Children?

Every reader of this article has heard, read, and knows about families, especially wealthy families; or may be experiencing in their own family, the seven signs Ms. Samalin listed and it is destroying the family financially, emotionally, and relationally. It is so easy to give in to children’s demands, and so difficult, so unpleasant, to do the hard thing of disciplining them. Children who have not learned self-discipline when young will be undisciplined adults unable to control their spending, desires, relationships, habits, and addictions. King Solomon was right when he wrote, “If you refuse to discipline your son, it proves you don’t love him; for if you love him, you will be prompt to (discipline) him.”

A problem in America today is affluence. The generations who founded this country, who fought the Revolutionary, Civil, first and second World Wars, who pioneered the west, built the factories, railroads, and suffered through the Great Depression had discipline forced on them. If they lacked discipline, they died. They raised their children to respect God, country, laws, authority, their elders, and education and hard work. Their lives were full of difficulties and temptations, but they were happy because they overcame their difficulties and mastered temptation through discipline. Happiness is not an entitlement; it is earned through self-discipline. Affluence too often attempts to protect children from experiencing difficulties and fails to teach necessary disciplines that will prepare them for life’s challenges, making them unable to cope with reality.

Read again the backgrounds of Clarence Thomas and Dr. Carol Swain. Will your children be notable for overcoming hardships and being successful or insufferable because they fulfill one or more items on Ms. Samalin’s list; or worse, notorious because they make the evening news in the streets of Seattle, Portland, Chicago, New York, or their college campus?

Choose to be happy by embracing life’s difficulties and resisting temptations and teach it to your children.