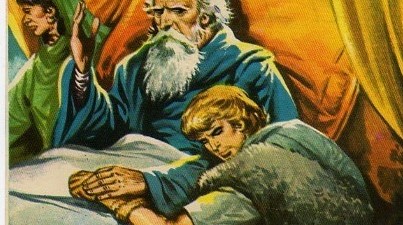 It’s Only A Bowl Of Stew!

You can also read this article at USA Daily Times

Dad, a successful business owner, has reached that time when he must decide who his successor will be. John, his oldest son, has worked in the business at dad’s encouragement for ten years in sales. The second child, Judy is a business attorney working for a local, but large law firm. Mary, the third child, also works in the business in operations, and Wendy, the baby, is a high school English teacher. Dad is thinking John will be his successor. As the business is a large portion of the estate, he also wants to be sure Judy and Wendy are not disinherited.

Isaac is the only natural-born son of Abraham and inherits everything. He marries Rebekah who eventually births twins. Esau is first and Jacob is born a few minutes later. Because Esau was first, he will inherit two thirds and run the family business when Isaac dies. Jacob will get the remainder.

“As the boys grew, Esau became a skillful hunter, while Jacob was a quiet sort who liked to stay at home. Isaac’s favorite was Esau, because of the venison he brought home, and Rebekah’s favorite was Jacob.  One day Jacob was cooking stew when Esau arrived home exhausted from the hunt.

Esau: “Boy, am I starved! Give me a bite of that red stuff there!”

Jacob: “All right, trade me your birthright for it!”

Esau: “When a man is dying of starvation, what good is his birthright?”

Jacob: “Well then, vow to God that it is mine!”

And Esau vowed, thereby selling all his eldest-son rights to his younger brother. Then Jacob gave Esau bread, peas, and stew; so he ate and drank and went on about his business, indifferent to the loss of the rights he had thrown away.”[i]

“One day, in Isaac’s old age when he was almost blind, he called for Esau his oldest son.

Isaac: “I am an old man now and expect every day to be my last. Take your bow and arrows out into the fields and get me some venison, and prepare it just the way I like it—savory and good—and bring it here for me to eat, and I will give you the blessings that belong to you, my firstborn son, before I die.”

But Rebekah overheard the conversation. So when Esau left for the field to hunt for the venison, she called her son Jacob and told him what his father had said to his brother.

Rebekah: “Now do exactly as I tell you. Go out to the flocks and bring me two young goats, and I’ll prepare your father’s favorite dish from them. Then take it to your father, and after he has enjoyed it he will bless you before his death, instead of Esau!”

Jacob: “But Mother! He won’t be fooled that easily. Think how hairy Esau is, and how smooth my skin is! What if my father feels me? He’ll think I’m making a fool of him and curse me instead of blessing me!”

Rebekah: “Let his curses be on me, dear son. Just do what I tell you. Go out and get the goats.”

So Jacob followed his mother’s instructions, bringing the dressed kids, which she prepared in his father’s favorite way. Then she took Esau’s best clothes—they were there in the house—and instructed Jacob to put them on. And she made him a pair of gloves from the hairy skin of the young goats, and fastened a strip of the hide around his neck; then she gave him the meat, with its rich aroma, and some fresh-baked bread.

Jacob carried the platter of food into the room where his father was lying.

Jacob: “It’s Esau, your oldest son. I’ve done as you told me to. Here is the delicious venison you wanted. Sit up and eat it, so that you will bless me with all your heart!”

Isaac: “How were you able to find it so quickly, my son?”

Jacob: “Because Jehovah your God put it in my path!”

Isaac: “Come over here. I want to feel you and be sure it really is Esau!” (Jacob goes over to his father. He feels him!)

Isaac: (to himself) “The voice is Jacob’s, but the hands are Esau’s!” (The ruse convinces Isaac and he gives Jacob his blessings):

Isaac: “Are you really Esau?”

Isaac: “Then bring me the venison, and I will eat it and bless you with all my heart.” (Jacob takes it over to him and Isaac eats; he also drinks the wine Jacob brings him.)

Isaac: “Come here and kiss me, my son!” (Jacob goes over and kisses him on the cheek. Isaac sniffs his clothes, and finally seems convinced.)

Isaac: “The smell of my son is the good smell of the earth and fields that Jehovah has blessed. May God always give you plenty of rain for your crops, and good harvests and grapes. May many nations be your slaves. Be the master of your brothers. May all your relatives bow low before you. Cursed are all who curse you and blessed are all who bless you.” (As soon as Isaac has blessed Jacob, and almost before Jacob leaves the room, Esau arrives, coming in from his hunting. He also has prepared his father’s favorite dish and brings it to him.)

Esau: “Here I am, Father, with the venison. Sit up and eat it so that you can give me your finest blessings!”

Esau: “Why, it’s me, of course! Esau, your oldest son!” (Isaac begins to tremble noticeably.)

Isaac: “Then who is it who was just here with venison, and I have already eaten it and blessed him with irrevocable blessing?” (Esau begins to sob with deep and bitter sobs.)

Isaac: “Your brother was here and tricked me and has carried away your blessing.”

Esau: (bitterly) “No wonder they call him ‘The Cheater.’ For he took my birthright, and now he has stolen my blessing. Oh, haven’t you saved even one blessing for me?”

Isaac: “I have made him your master and have given him yourself and all of his relatives as his servants. I have guaranteed him abundance of grain and wine—what is there left to give?”

Esau: “Not one blessing left for me? O my Father, bless me too.” (Isaac says nothing as Esau weeps.)

Isaac: “Yours will be no life of ease and luxury, but you shall hew your way with your sword. For a time you will serve your brother, but you will finally shake loose from him and be free.”

So Esau hated Jacob because of what he had done to him. He said to himself, “My father will soon be gone, and then I will kill Jacob.” But someone got wind of what he was planning and reported it to Rebekah. She sent for Jacob and told him that his life was being threatened by Esau.  “This is what to do,” she said. “Flee to your Uncle Laban in Haran.”[ii]

A family conflict that started thousands of years ago is still being played out in current times in the middle east. While this is an example of how greed and deceit can destroy a family, it also highlights another problem prevalent in family businesses.

“. . . research has found family firms do better if they don’t choose the firstborn as chief executive.

Tradition within many family-owned firms favors primogeniture: naming the first-born child or son as the future boss. But a study published in 2018 in the Strategic Management Journal found that family firms that choose a later-born child as CEO saw an average 39% increase in the value of their assets, including stocks and physical and intellectual property, during the period of the study, 2000 to 2014. Those that chose a firstborn child saw just a 9% increase.

“Usually, first-born children take actions that are unconsciously aimed to please their parents. They are often very scared to innovate, and they are mainly oriented to preserving the status quo,” Prof. Calabrò says. “Second- or later-born children have more innovative, creative behaviors, and this fosters [greater] innovation levels than other types of businesses.”

“The younger child may have more opportunity to see what their elder siblings are going through in terms of the journey of deciding what they want or don’t want, which can help the younger sibling to decide in a more planned and pragmatic way what they want to do,” she says.”[iii]

Considering Esau gave up his rightful inheritance for a bowl of stew, I cannot imagine he had the mentality or skill to run the family business successfully. We can fault Rebekah and Jacob for their evil plotting, but we can also admire their creativity and drive. It has been my experience people who make emotional decisions to satisfy temporary pleasures, usually make bad financial decisions and will not be good entrepreneurs or managers.

Jacob’s uncle Laban is as tricky as Jacob and gets Jacob to work for him for fourteen years by withholding the right to marry his daughter, Rachel. Jacob turns the tables again, convincing Laban to give him ownership of all the spotted and black sheep in Laban’s flocks. “Moreover, he watched for the stronger animals to mate, . . . but didn’t with the feebler ones. So the less healthy lambs were Laban’s and the stronger ones were Jacob’s! As a result, Jacob’s flocks increased rapidly and he became very wealthy, with many servants, camels, and donkeys.”[iv] Later, God changes Jacob’s name to Israel, which today is a prosperous nation in the middle east. The second son was the best to grow the family business.

A true story I learned from a retired financial advisor demonstrates how the patriarch assuming the firstborn child should be the successor can potentially be fatal for the business and the family. My lead paragraph sets the stage. Dad contacted the advisor asking for help. The retired advisor says he will only meet with the entire family. The first question is, “If dad dies tomorrow, who will run the business?” John and Mary (not real names) both raised their hands. Now we have a problem! Dad had already picked John. Mary believed she was more qualified than John.

The advisor, as Family Wealth Leadership does, interviewed everyone. He learned John never wanted to be employed in the company. The only reason he had spent years working for dad was to honor his request. He did not want to be the CEO as he had other passions. Mary was passionate about the opportunity to take the reins.

What would have happened if this information had not been uncovered? John would have been miserable, performed poorly, possibly running the business into the ground while Mary seethes watching the company’s value decline. Judy and Wendy too see their inheritance disappearing, so they join the fight over control to oust John and insert Mary. Even if the business can be salvaged, the family relationships cannot. If there is no family business, the outcomes over the wealth will be the same, loss of wealth and relationships.

When proper and purposeful planning, and good communications are nonexistent, conflicts will certainly arise. The consequences of avoiding conflicts will always be worse than the emotional discomfort of getting the issues on the table while they can be solved. But hey, it’s just a bowl of stew!