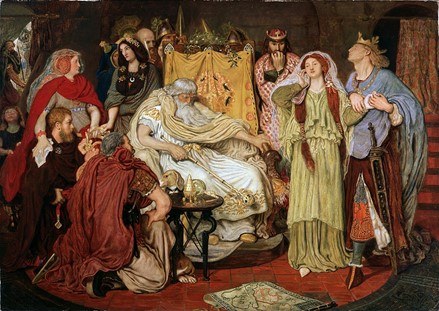 This Should Make Good Theater!

Larry, the aging CEO of a successful technology company, decides to step down and divide his ownership equally among his three daughters. First, however, he puts his daughters through a test, asking each to tell him how much she loves him. Gloria and Rene, Larry’s older daughters, give their father flattering answers. But Courtney, Larry’s youngest and favorite daughter, remains silent, saying she has no words to describe how much she loves her father. Larry flies into a rage and disowns Courtney. Raymond has been dating Courtney and says he still wants to marry her even without her inheritance, so she marries him without her father’s blessing or inheritance.

Larry quickly learns he made a bad decision. Gloria and Rene swiftly begin to undermine Larry’s authority. Unable to believe his beloved daughters are betraying him, Larry falls into deep despair and desperation. He flees his daughters to find refuse in Painesville, a small, secluded town accompanied by Kent, a loyal friend.

Meanwhile, Glen, the technology company’s CFO and Larry’s equal partner and friend, also experiences family problems. His illegitimate son, Ethan, tricks him into believing his legitimate son, Edward, is trying to kill him. Fleeing the manhunt his father, Glen, has set for him, Edward disguises himself as a homeless person and escapes to Painesville.

When Glen realizes Larry’s daughters have turned against their father, he decides to help Larry despite the danger to himself. Rene and her husband, Calvin, discover him helping Larry, accuse Glen of defrauding the company, sue him and win, destroying him financially. He is rescued by his son, Edward, who brings him to Painesville where he and Larry are hiding.

Courtney, with Raymond and some of their friends, set out for Painesville to save her father, Larry. Ethan, Glen’s illegitimate son, becomes romantically entangled with both Rene and Gloria, whose husband, Albert, is increasingly sympathetic to Glen and Larry’s cause. Gloria and Ethan conspire to kill Albert.

The depressed Glen tries to commit suicide, but Edward discovers him in time to call 911 and saves him. Ethan, realizing Courtney too is a threat to him getting control of the company arranges an attempt on Larry’s life, making Courtney look like the unsuccessful assassin.  She is tried and goes to jail. Edward, to protect his father Glen, Larry, and retain control of the company kills Ethan while defending them from Ethan’s attack but Glen is also killed. Gloria poisons Rene out of jealousy over her romantic advances toward Ethan and then kills herself when her treachery is revealed to Albert. Ethan’s betrayal of Courtney leads to her unwarranted execution in prison; and Larry finally dies out of grief at Courtney’s passing. Albert, Calvin, Edward, and Larry’s elderly friend, Kent, are left to take over the business under a cloud of deceit, murder, jealousy, destruction, sorrow, and regret.

The reason this story would make good theater is because that is exactly what it is. I gave you a synopsis of Shakespeare’s play, King Lear. I just changed the names and circumstances. But isn’t it interesting how well Shakespeare captured real life? Hopefully, murder and killing are atypical, but the deceit, jealousy, backstabbing, damage to family relationships, sorrow and regret are all too common and reoccurring in wealthy families, especially when a business is involved.

Here are some bullet points from the Family Business Consulting Group[i] with my recommendations added.

Do Not Avoid Conflicts: Most of us are conflict adverse. It is uncomfortable and can lead to even greater conflicts, so we stay silent when we should bravely face the dragon. Undiscussed and unresolved conflicts never really go away, they just fester until they burst, dripping poison on everything and everyone including innocent bystanders who were not involved in whatever caused the conflict. If the conflict is minor, the parties may be able to settle it immediately through open and honest communication. If more serious, an objective non-family professional should be included in the conversation. It should be someone who would not favor either side to avoid the second danger, triangulation. This happens when a family member or friend is not objective and the two gang up on the third participant. This is common in families. Parents can favor one child over the others. Siblings too may have a favorite brother or sister. It could be by gender, age, or personalities and certainly by shared greed.

“Do you know where your fights and arguments come from? They come from the selfish desires that make war inside you. You want things, but you don’t get them. So you kill and are jealous of others. But you still cannot get what you want. So you argue and fight. You don’t get what you want because you don’t ask God. Or when you ask, you don’t receive anything, because the reason you ask is wrong. You only want to use it for your own pleasure.”[ii]

Do Not Avoid Having Written Guidelines. If there is a family business or a family office in which some or all the family members are involved, there should be written rules and procedures everyone has read and committed to follow. We call these a family or family office constitution. Writing them down has several benefits. First, transferring a thought or idea to paper creates clarity. For example, writing an article like this will go through twenty to twenty-five iterations before it is final. I add, subtract, reorder, and revise until the words on the page adequately describe the message or lesson I am conveying.

Second, the written word allows the reader to gain clarity by rereading a paragraph multiple times and confirming with the author that they both have the same understanding. If there is disagreement, then it must be rewritten until there is agreement.

Third, once there is agreement, no one can argue they did not know the rules or did not understand them. As families move through subsequent generations, it is important to document the family’s history, values, and purpose if the intent is for each generation to perpetuate those values and purpose. The “telephone game” is an example of what happens when voice messages are the only form of communication. The first person whispers a message to the person next to him or her. This continues through a chain of ten or twelve people. The last person shares the message out loud. It will always be very different than the original message. The family constitution should be reread often and updated as needed.

“Good communication is the bridge between confusion and clarity. Nate Turner”

In addition to a constitution, we suggest the family have what we call a “Family Wealth Statement” that documents the family’s history, where they are today, and where they want to be in the future. This will be updated constantly to reflect births, deaths, marriages, divorces, and business successes and failures so future generations will understand the good and not-so-good history of the family and its values and purpose.

Do NOT Avoid the In-Laws. This is a big one! When a child marries, their spouse often has much greater sway over that child than the parents or siblings ever had. If that in-law does not have a seat at the table, there will be hidden agendas that can destroy a family. Go back to the story and read, “Gloria and Ethan conspire to kill Albert.” And Gloria poisons her sister over her involvement with Ethan and they are all trying to get rid of Larry. The in-laws may not have a vote directly, but they can sure influence how the child votes. Better to at least hear their concerns and agendas around the family table than to have them confined to and plotted (Definition: A secret plan to accomplish a hostile or illegal purpose or scheme) in separate bedrooms and kitchens.

Do Have the Family Mission and Value Statements Handy. In a perfect world every family member would have these memorized. Since we live in an imperfect world, have them at the ready when the family needs to make major decisions on new investments, paying for family members’ needs, and especially for transferring leadership. Revisit them at every family office meeting.

Identify Strengths and Weaknesses in the Family. The objective of having a family office is to involve all family members in its success some way. Some will want involvement in the daily operations, some have other careers, and some will not be involved at all. Everyone can still be a stakeholder; however, if they choose not to be part of the family team at all, then they will not participate in any of the benefits the family office provides. A successful team identifies every members’ skills and shortcomings and provides adjustments and training to put each person in a role they can perform successfully for themselves and the team.

Deal with Family Emotion Immediately. The objective of operating a family office is to protect and grow the family relationships along with the wealth. It must adopt and execute good business skills, strategies, and objectives; but like all businesses, it needs a strong Human Relations department. This is even more important in families because many of the emotional hurts and needs go back many years and have never been addressed. These emotions will be carried forward into the business operation. Here again is when outside professionals can add significant value to the family’s wealth and health.

Adopt a Multi-Level Model. It should be evident from my previous statements that families are very complex, especially in a family office because it mixes business objective and operations with family emotions and relationships. Most people can leave their work problems at work and their family problems at home. Not so easy in a family office. There are at least four elements that must be addressed (1) Organization, (2) Teams, (3) Individuals, and (4) Humanity. Space does not allow me to go into detail on each of these. I will simply say it requires working concurrently on the whole entity while also working on all the pieces; the “whole” being the family and the family office and the “pieces” being the individuals, specific committees, and departments and various business entities in the family. The humanity is the emotional and physical requirements of every person. I am adding that it also includes the family’s responsibilities to the rest of the world. If the family is not contributing to making the world a better place for humanity, then it will have fallen short of what its real purpose should be. It must provide valued services for humanity. Not doing so will ultimately bankrupt the family’s wealth and relationships.

“Children, obey your parents the way the Lord wants, because this is the right thing to do. The command says, “You must respect your father and mother.” This is the first command that has a promise with it. And this is the promise: “Then all will go well with you, and you will have a long life on the earth.” Fathers, don’t make your children angry, but raise them with the kind of teaching and training you learn from the Lord.”[iii]