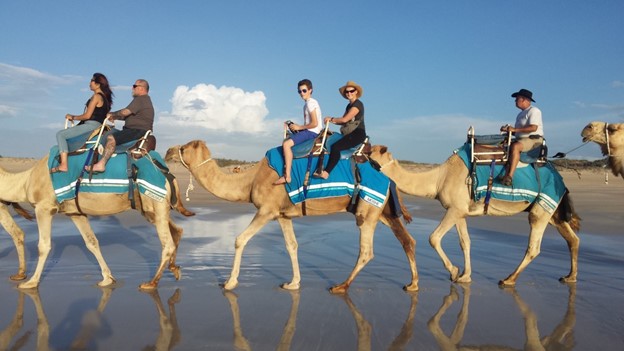 Where Can I Buy a Used Camel?

Supposedly Sheikh Mohammed bin Rashid al Maktoum, the vice president and prime minister of the UAE, of which Dubai is one of the seven emirates — made the comments after being asked about the “future of his country” during an “exclusive BBC interview”.[i] It is questionable whether this quote is accurate.

While the actual quote may be in question, the concept and reality it represents is not. It is the Arabic version of “Shirtsleeves to Shirtsleeves in Three Generation;” that family wealth will be lost and, regrettably, the family will likely be torn apart in the process.

Money and people in every family are inseparable and, more often than not, a destructive formula! Whether money causes conflicts in a family or it is relational issues, struggles, or personal behaviors and addictions that erode the financial fabric, statistics and the law of entropy will ensure that most families will lose their wealth, effectiveness, and closeness within three generations.

It isn’t all your fault or your brother’s, sister’s, mother’s, or father’s fault if your family is struggling with a variety of issues and challenges. When wealth transfers from one generation to the next, it is almost assured that deterioration in the family will occur. It is a law. It is the second law of thermodynamics—entropy. Entropy is the fact that everything in the universe always moves toward its lowest common denominator, its simplest form, unless overridden by another physical or chemical law. An ice cube left at room temperature will melt and then evaporate. We can reverse the process by applying other laws; we can combine two hydrogen atoms with one oxygen atom to get water, then freeze the water by lowering the temperature to get the ice cube. The law of entropy is just as valid in families. In their natural state, families want to move from a complex to a simple state. Owning expensive, complex things such as businesses, real estate, and investments and trying to divide them equitably among many people with multiple generations and keeping everyone happy is impossible. Unless other laws and principles are intentionally applied over time to overcome family entropy, deterioration will occur. The problem, like razing a ten-story office building, is that tearing something apart is dirty and destructive and leaves piles of debris.

The Odds Are Stacked

You may be thinking, Yeah, but my family is different. We have a good family. That won’t happen to us. If that’s what you’re thinking, please memorize, “Shirtsleeves to shirtsleeves in three generations.” It has been proven and documented in every country throughout thousands of years that 70 to 80 percent of wealth is lost as it passes from one generation to the next, so that the fourth generation starts with zero wealth. Italy: “From stalls to stars and back to stalls.” Spain: “Who doesn’t have it, does it, and who has it, misuses it.” Brazil: “Rich father, noble son, poor grandson.” China: “Wealth never survives three generations.” Now we can add the Arabic version, Camels to Camels in three generations. The message is clear. By the end of the third generation, everything you worked so hard to build and maintain has a 70 to 80 percent probability of being back at zero when your great-grandchildren arrive. Your heritage as well as your wealth will have dissipated. King Solomon told us three thousand years ago what to expect.

“Riches can disappear fast. And the king’s crown doesn’t stay in his family forever—so watch your business interests closely. Know the state of your flocks and your herds; then there will be lambs’ wool enough for clothing and goats’ milk enough for food for all your household after the hay is harvested, and the new crop appears, and the mountain grasses are gathered in.” (Proverbs 27:23–27 TLB)

Too much emphasis on material things: 60 percent

Naïve about the value of money: 55 percent

Spend beyond their means: 52 percent

Have their initiative ruined by affluence: 50 percent

Not do as well financially as parents would like: 49 percent

Not do as well financially as parents did: 44 percent

Will be resented because of their affluence: 36 percent

These eight concerns are just components of entropy; they are concerns precisely because they can lead to deterioration in a family. Again, the only way to stop this is to use another law or principle that can reverse the effects of entropy. The principles I have identified are purpose, principles, plan, protection, preservation, process, people, preparation, participation, and philanthropy.

Purpose: I use this in two contexts. First, overcoming entropy must be intentional; you have to want to conquer it or intend to keep it from happening in the first place. Second, you and your family must define and clarify what your purpose is in this world. Without a clear purpose that everyone shares and is committed to, there will be nothing to hold your family together. Everyone will go his or her separate way.

Principles and Values: There must be sound moral, ethical, spiritual, social, and financial values, laws, and principles that everyone accepts and strictly adheres to even at the risk of his or her own detriment if it benefits others and the family.

Plan That Protects, Preserves, and Promotes Family Values and Purpose: I have said this several times, but it is important to repeat it. It is critical that there be a relentless commitment by everyone to build up and not let anything tear down the family’s capital. That includes financial, human, spiritual, intellectual, and social capital. There must be a constant pursuit of excellence. Anything that depletes or erodes any form of the family’s capital should be avoided or quickly killed.

Process: The process is how the plan is implemented. There should be standardized processes and systems that are replicable and repeatable so they can be learned and applied by every generation. However, there also needs to be a process for constantly analyzing, testing, and questioning the continuation of systems and processes and modifying, discarding, and initiating new systems when necessary and beneficial.

People: People are the most important component in a family and the greatest source of joy and conflict. Unfortunately, the conflict too often overrides and destroys the joy. The conflict is usually in two primary areas. The first is in relationships. Starting the day each of us enters this world and must interact with parents and siblings, we experience hurts, fights, disagreements, and insensitivities that damage or destroy relationships, and those conflicts will impact the family’s financial wealth negatively. The second form of conflict centers on money. Even in families with good relationships, money tends to cause those relationships to deteriorate. Whether the people are causing the money problems or the money is causing people problems, if both are not addressed in unison and carefully crafted and coordinated, the family will not achieve significance.

Preparation and Participation: Every job I ever had, and I suspect you will concur, required OJT, on-the-job training. When I learned to drive a car, it was under the tutelage of an instructor in my high school drivers’ education class. There was classroom instruction, homework, and then time in the automobile learning how to use the clutch to shift gears (if you are under forty years old, you can ask your parents what a clutch is), first driving in the school parking lot, then on city streets, and finally on the freeway. Why then do families expect their children and grandchildren to manage money and wealth without preparation and participation under the supervision of people who can guide and teach them what works and what doesn’t work? Yet that is exactly what most families do. The kids are unprepared and inexperienced when dad and mom die and transfer millions of dollars to their care. The plan and process mentioned above must incorporate a training program, systems, and structures that teach and offer hands-on experiences—the opportunity to fail and succeed under protective supervision.

Philanthropy: Philanthropy is a tool that has the greatest opportunity for uniting a family around a common purpose with shared values and principles and a platform for teaching and setting an example for subsequent generations of what brings true joy in life. It is one area where it is at least possible to avoid conflicts, greed, and jealousy.

Preparing and teaching children and grandchildren should start early and continue over many years while adults are present to guide and instruct them. Assuming they will somehow acquire these skills and knowledge after dad and mom are gone is insanity. The final point under preparation is involvement in, teaching about, and modeling philanthropy. With good planning and proper structuring, significant estate taxes can be eliminated, control over the use and investing of the funds can be maintained, cash flow can be made available, many people and causes can be helped, and children and grandchildren can learn important lessons, values, compassion, charity, and love. A family not involved in philanthropy will most probably not survive financially beyond the third generation. It is almost impossible to be a significant family whose children have significance if philanthropy is not embraced and actualized. It is not a matter of requiring large dollar amounts but a matter of attitude and heart.

Philanthropy can be conducted in relatively small amounts through donor-advised funds and charitable remainder or lead trusts or in larger amounts through a family foundation. And that doesn’t mean treasures are the only form of charity. Sometimes, the best thing you can do for the charities or causes you want to support and for your own family is to donate your Time, Talents, and Training. Volunteers are always needed; very few charities can survive even if they have the finances if they have no volunteers. If they must pay people, maybe 60¢ of every dollar actually funds that need. Using volunteers instead could raise that to 85¢ of every dollar. More important is involving children and grandchildren in boots-on-the-ground volunteerism can be life changing and legacy building.

What stage of entropy is your family in at this time? Remember, it is a physical law of nature, much like gravity. Your family is experiencing entropy whether or not you will admit it. An airplane flies because it uses other physical laws to overcome the gravity that would keep on the ground. It uses aerodynamic laws of speed, shape of the wings, and lift. Like an airplane, a family must apply other laws to intentionally design its structure to provide the lift and direction it requires to transport the family wealth into the future. Even more important, it needs a well-trained pilot and crew that can fly that plane when the original pilot and crew do not want or cannot do so. Better an airworthy, well equipped airplane than a used camel!

[i] Sheikh Mohammed did not say great-grandson ‘will be back on a camel’ in 2014 interview | Fact Check (afp.com)

[ii] Institute for Preparing Heirs white paper, “Beyond the Money, 2013”; paragraph “Parents Worry Primarily About the Impact of Money on Their    Children,” U.S. Trust Survey of Affluent Americans XIX, December 2000